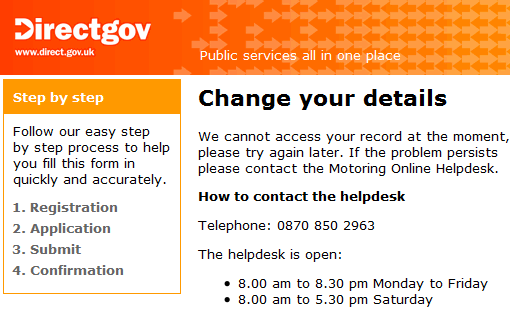 Last week I realised I needed to update the address on my driving licence after moving house. Since I had this realisation at work, and knew full well that I would forget again as soon as I got home and became distracted by the plethora of deliberately mind-numbing activities available, I decided the best course of action would be to do it during lunchtime at work.

I was pleasantly surprised to find that since my last house move, the DVLA had entered the late 20th century and made the application available to complete (mostly) online, supposedly saving me the time of hunting down a copy of the official form and filling it in.

Unfortunately, that’s where the pleasantries ended.

Attempt #1: I already had a Government Gateway login (placing me in common with less than 0.1% of the population, I suspect). However, I was told my driver record could not be found. Turned out I needed to add my middle name to the application, despite entering my driver number exactly (which wasn’t even a required field). Had to start over.

Attempt #2: Suddenly told halfway through the process that I needed some obscure numbers from the paper counterpart, which precisely nobody ever carries with them. How they justify making this a required field when the actual driver number is optional make no sense whatsoever. Grumbled, and traipsed home to get it.

Attempt #3: On the very next screen I was told they needed my passport number to validate my identity, or I would be subjected to some other ‘alternative’ identification process, which would presumably be uncomfortably invasive (this is the DVLA we’re talking about, after all). Swore. Traipsed home to get it. Let’s face it, any complicated process will always be a challenge to implement online, but a good start would be to list the things needed before beginning, especially if they are not the sort of thing you carry around with you on a regular basis.

Attempt #4: ADSL connection chose the exact moment after submission to drop the PPP session. Swore profusely, and made a note on my to-do list to call my ISP and ask them how my upgrade order was progressing. 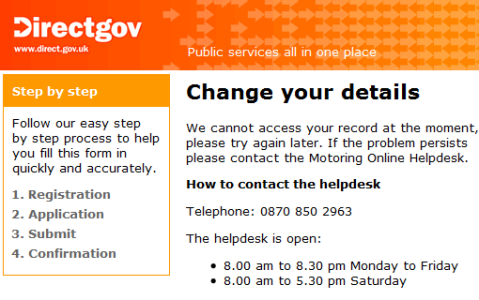 Swore,  banged my head into the desk. Swore again. Repeated this process twice more over the next couple of hours each time I tried again, vainly hoping the problem would be resolved.

“Sorry… You are not eligible to apply for this service.”

No clues given to explain why. Swore, then looked up the DVLA offices on Bing Maps to assess the viability of a UAV strike. Eventually worked out that my application had in fact succeeded, and was awaiting the return of my old licence by post before progressing. Found the option to reprint the completed form and finally got the application going.

All in all, this was a bad experience with a government department I’ve had nothing but bad experiences with before (the worst case was when they lost Mrs AT’s passport just weeks before our honeymoon, after sitting on her driving licence application for 4 months). Her own house move application also failed its first attempt, despite my careful mentoring, after the session timed out and left her in the same situation as my attempt #6.

Personally I prefer the US model, where in most states the people who give out drivers licences have ACTUAL OFFICES that you visit IN PERSON and they sort all this stuff out face-to-face. I’m sure US readers will have their fair share of horror stories, but every experience I’ve had in the MVA has been a good one.