In moments of boredom while scoffing biscuits in the staff room, I occasionally flick through the TES. In my entire time at the school I’ve never seen anyone else even open it, but the letters page is often a festival of laughably poor reasoning that rarely ceases to entertain.

On page 4 of last Friday’s edition is this chart:

This chart is a steaming pile of male bovine excrement.

Upon turning the page my eye was immediately drawn to it, and it seemed incredible even at first glance. Within seconds I had spotted that the y-axis starts not at 0, but at about 3,750, conveniently omitting nearly 3/4 of the scale in order to outrageously exaggerate the difference between the two plotted figures. Instead of showing that the first figure is 28% higher than the second, it appears as if it is more than 300% higher. Let’s have a look at the same data with a more honest axis, shall we? 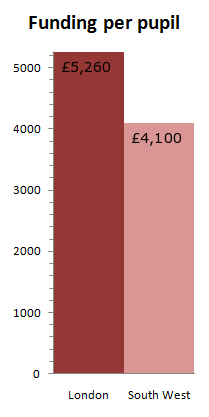 Not quite so extreme, is it? I frankly have no idea whether the argument presented in the article is valid, because I stopped reading the moment I saw how offensively misleading the illustration was. It undermines the credibility of the entire article, and also demonstrates utterly irresponsible editing; no-one with half a brain could look at this and not realise how deliberately deceptive this is to the reader’s subconscious.

I know that writers themselves usually do not pick their illustrations (or even headlines in many cases), so the author, Kerra Maddern, is probably off the hook. However, to whoever on the TES staff was responsible for this atrocity, I have only this to say: you are a disgrace to your publication. Further, to the editor, Gerard Kelly: sort your act out. This kind of misleading idiocy may be a tabloid staple, but you should know better.