On Thursday, Microsoft release ‘Wave 4’ of Windows Live Essentials, otherwise known as the 2011 version. Though primarily aimed at home users, there are a couple of applications that are great for schools, particularly Windows Live Movie Maker. There are a couple of gotcha’s: first, only Vista and Windows 7 are supported in the latest version, and a lot of schools are either too scared or too poor to upgrade from XP. Secondly, it’s not the easiest bundle of application to deploy over the network.

This is a technical article which is light on judgemental ranting, so try to keep up.

Inside the main .exe install package are literally dozens of individual .msi installers, plus a couple of .exe and .msu installers, with a strict set of dependencies. Some of them also need calling with custom arguments. GPO Software Deployment is therefore a total pain in the backside.

With the previous version, I used App-V to virtualise the applications I wanted, but I had no such luck this time. The first problem I hit was that the install would simply fail while the App-V Sequencer was running even though it installed fine on the same machine without the sequencer running: 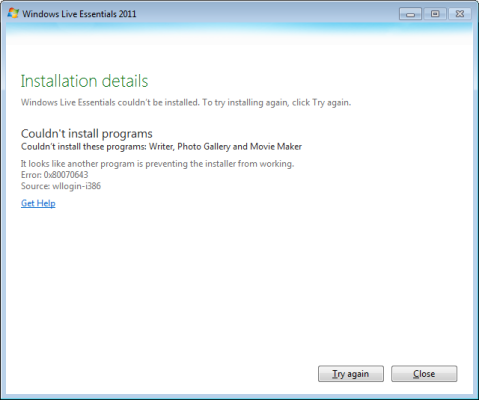 This turned out to be because a required service (Windows Live ID Sign-in Assistant) couldn’t be started up during the installation. A similar problem exists for Office 2010 when virtualising with App-V. Once I’d worked around that, there was a bigger problem in store. Windows Live Essentials doesn’t allow you to install to anywhere other than the default location (%ProgramFiles%\Windows Live), presumably because the Windows Live team have control issues and want it installed where THEY SAY SO.

Unfortunately, App-V requires programs to be installed to it’s own Q: drive for supported configurations, and last time around I’d fudged it using a very unsupported method. It seemed OK at the time, but it came back to haunt me when it was time to upgrade to the newest version. Clients quickly stopped picking up either version of the virtualised Essentials programs, and sounded the death knell for my App-V plan.

Time for Plan B – deploying using System Center Essentials (or System Center Configuration Manager). This basically means working out how to call the main .exe installer with command lines variables to silently automate the install. Here’s how to do it:

First you’ll want to download the full installer, rather than the web version, to avoid each client having to download the setup files individually. You can find links to the correct version for various languages on the Windows Live Solution Center.

Once you’ve got the (quite large) wlsetup-all.exe downloaded, you should refer to posts #15 and #16 of this thread on AppDeploy. That pretty much explains the switches you need to call for a silent install with particular applications selected (because you probably don’t want to install Messenger to all the computers the kids use, or let your 1,000+ users cripple your school’s Internet bandwidth by syncing with Live Mesh). This was the command line I ended up using:

You might be forgiven for thinking that the /No arguments are only necessary if you’re installing the Bing toolbar (and I’m not that crazy), but I found that after my first reboot without them, I was prompted to make these choices manually. You can find the full list of values needed to select individual applications on the aforementioned AppDeploy thread.

Uninstall (if you need to automate it) is trickier. There is no master uninstall program, so you need to call the uninstall for each component in turn. You can find them by searching through the registry for “Live” under the HKEY_LOCAL_MACHINE\SOFTWARE\Microsoft\Windows\CurrentVersion\Uninstall key. Check the Uninstall value for each key you find. For the .msi installers, you’ll find something like:

To change that to a silent uninstall, change the /I to /X and then add /qn to the end, like so:

Luckily, in normal circumstances, you won’t actually need to do a full uninstall, as when the next version comes around it should install perfectly happily over the top (famous last words).

There are a couple of things I wanted to tweak for my users to provide the most seamless experience for them, which involved adding some values to their personal registry settings. I did this with Group Policy Preferences, but you can do it using login scripts too if that’s the way you roll.

Microsoft probably won’t like me doing it, but I do not want my users to have to agree to a licence the first time they use the software. I’m installing it, and I’m accepting the licence on behalf of the organisation. To stop them seeing it, add the following:

It’s not a required step, so in my book it’s not required at startup. Add this to get rid of  it:

I’d rather they left their file associations alone so I don’t get calls about how to change it back later. Add this to prevent them being prompted:

(This value is a single REG_MULTI_SZ entry, not separate registry entries for each file type.)

If you have registry tips for other parts of the Essentials package, leave them in the comments.