Archive | You're Doing It Wrong RSS for this section
6th August, 2013

Recently I had the dubious honour of tidying up a laptop that a colleague had handed down to them by their son who “works for Cisco”.

It quickly became clear he had put absolutely zero effort in getting the laptop ready for use by a normal person. Highlights of this disaster area were:

I’m sure this guy is a fine network engineer, but remind me never to hire former Cisco employees to do any kind of workstation management.

A few years back, we took delivery of a batch of new mice for the computer labs. These Microsoft mice have 18 pages of English language instructions. 18 PAGES. For a mouse. I saved one at the time as a memento of this farce, and recently, I came across that forgotten relic at the bottom of a desk drawer.

Let’s get started, shall we?

END_OF_DOCUMENT_TOKEN_TO_BE_REPLACED

If you are going to put required fields on your online registration forms, it really does help if you actually mark it as required, so I don’t have to see stupid red error messages when I click submit.

And you know what? Actually labelling the field at all would be a good start. END_OF_DOCUMENT_TOKEN_TO_BE_REPLACED

If you search on Google Maps for the address of Google’s offices in London Victoria, you’ll be taken to the correct address. However, if you then click on the location marked ‘Google London’, the address it gives you is for a different office building in Soho about 2 miles away:

(The address given is the location of their separate sales offices that opened last year, but that hardly excuses the place marker being 2 miles out of place).

One of the more interesting new features that was introduced in Outlook 2010 was the Outlook Social Connector. For those of you who haven’t used Outlook 2010, it’s basically it’s a small window below the reading pane that collates information about all the people involved in the selected email conversation. As well as mining your Outlook folders for related messages, calendar items, etc., it can also pull in updates from social networks.

If you install the addin that lets it link to Facebook, you’ll see Facebook updates for those people you are friends with on Facebook. Thing is, it will also look up information even for people you aren’t friends with.

Normally you can’t search just by email address on Facebook, but the Outlook Social Connector does just that. It won’t show you anything that you couldn’t see anyway if you found that person on Facebook manually, but it does find them for you, seamlessly, just based on the email address. So if you have your work email registered on your personal Facebook account, your sexually suggestive profile picture will show up at the bottom of the reading pane when you send me an email:

I went and checked this profile on Facebook (purely in the name of research for this article) and can confirm that the profile did not have the person’s email address publicly visible. However, many of this person’s photos were set to public, and the photo album that had a blow-up doll as the album cover did not encourage me to investigate any further. Nor did it encourage me to do business with the person who had emailed me.

Needless to say, our staff AUP has a strong recommendation to refrain from adding a school email address to Facebook.

A little while ago, our MIS provider did some work for us to resolve some performance issues with their product. When I got the code back, I took a look over it as I needed to make some further small adjustments myself to make it completely fit our needs.

Since then, I have found myself unravelling almost every aspect of the code. I’ve found data queries that use a SELECT DISTINCT on 500 records to return 8 values that exist as unique items in a different table of 30 records. WHERE clauses with 2 different parameters that can only ever return data if they are identical. Even code that I looked at a week ago and thought “huh, that’s an odd way to do it, but it seems to work” is slowly proving itself to be mindnumbingly dumb the more I dig into the inner workings.

It doesn’t disturb me that I’m finding these errors. It’s a complex system. What disturbs me is that I’ve had no formal training on this system, and the person who did the work is the MIS company’s expert on it.

There are times – increasingly frequent times – when I seriously wonder how they have survived in the market this long.

Suspended ceilings are a fantastic invention from a cabling perspective, because they reduce the need for unsightly trunking and hide a multitude of sins when it comes to drilling and fastening. 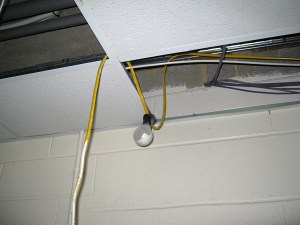 Such as this left over construction lighting we found this week.

There are half a dozen of these dotted around the ground floor of one of our buildings. None of them are wired to anything, just bare contacts at the end of an expanse of yellow electrical cable.

We’re pretty sure they’ve been up there since the place was built 15 years ago.

Pulling a fast one

Couriers never cease to be a pain in the backside. This week I had a next-day delivery fail to show up, and when I asked the supplier to make enquiries the following day, they were told that the courier had attempted to deliver at 18.10, but found that the school office was shut, and left a card.

This is not a major version increase

I’ve always hated what Google did to the term ‘beta’, and I’ve written about it before. Not content with utterly debasing the meaning of the word when applied to software, they’ve now set their sights elsewhere: the major version number. When ComputerBites posted on Twitter that he was about to install Google Chrome version 12, this was my response:

I got some interesting responses from that, all of them agreeing. Unfortunately, the disease has already spread, and Firefox has gone the same way. Three months after Firefox 4, and with only a single .0.1 update in between, Firefox 5 is ready to download.

Dear ooVoo: here’s how to fix your annoying user experience

UPDATE 28/04: In the comments, an ooVoo representative reports that they have developed an update that addresses the below complaint. If you install this update on your Dell Streak from the Android Market, ooVoo will no longer start up at boot unless you want it to.

Dell obviously thought they had a winner on their hands when they managed to get up-and-coming video calling service ooVoo to support the front-facing cameras on their Dell Streak line, so decided to bundle it with the latest official firmware (based on Android 2.2.2) for the Streak 5 and Streak 7.

I installed the 2.2.2 OTA update on my Dell Streak 5 yesterday. It took me all of about 5 minutes to begin to detest ooVoo.

Basically, I wasn’t interested in using it yet. Unfortunately, I didn’t get a choice. It runs at startup and nags you about not being signed in, whether you want it or not, and there’s no way to stop it doing so. It also continues running in the background, even after you click Exit, and because it’s baked into the firmware, it can’t be uninstalled without rooting, which is something I’m really not interested in (and shouldn’t be necessary).

I contacted a couple of Dell reps on Twitter about it, and got mixed responses. @DellCares directed me to telephone support, who didn’t really understand what I was talking about. However, Stephen Jio (@stephenjatdell) clearly understood:

@AngryTechBlog Yeah, I hear you. Not ideal having ooVoo alert at boot up & will pass on feedback #dellstreak

That’s reassuring, but while I think Dell probably should have held off bundling ooVoo until this annoying behaviour was rectified, ultimately it is ooVoo that needs to change their product so it’s not so sodding annoying. And doing so is not rocket science.

Here’s what needs to happen

That’s the Preferences screen in Skype for Android. See that top option? If I don’t want Skype to start automatically, I just untick that box.

ooVoo needs this option. It needs it badly, and it needs it now. This option should either be accessible before the login screen so I can simply turn off the automatic startup, or automatic startup needs to be off by default until the first time a user logs in with an ooVoo account. So to be clear, it must not be on by default and hidden behind the login. No potential customer should have to create an account just to opt out of using the product.

This needs to happen quickly if ooVoo want to avoid alienating their potential customers before they even get a foothold. They certainly need to do it before Skype get video calling working, because right now the UI for Skype on Android is pretty much spot on, and ooVoo will be utterly and deservedly crushed if they can’t even get the basics right. Hell, I don’t even know if ooVoo is worth using yet, but I do know I won’t even bother trying so long as they are trying to force me into it.

The Angry Technician
Blog at WordPress.com.