Spot the difference: is your Griffin Survivor case a counterfeit?

Recently I had the misfortune of buying a Griffin Survivor case for an iPad mini that turned out to be a counterfeit product. The purchase was made from the Amazon UK marketplace, which is not normally known for particularly dodgy sellers, and the seller had a feedback rating in excess of 95%, which is normally a reasonable sign of trustworthiness. It’s entirely possible the seller themselves didn’t know they’d been had by their supplier, but I was suspicious from the moment I received the product.

Griffin themselves have blogged about this as their premium products are an ongoing target for counterfeiting. However, not all of their advice is useful: they suggest anyone with a big price difference from their own store is selling fakes, but I eventually got my hands on a real one (from Amazon proper, who were out of stock when I originally purchased) for less than half the price Griffin list on their UK store.

Now that I have the genuine item, here’s a quick spot the difference so you an get a better idea of whether yours is dodgy or not.

Unfortunately I forgot to snap a picture of the front of my fake case before sending it back for a refund, but here’s what the real thing looks like. The fake one actually didn’t look much different from this in terms of design and style, but it was different, and was dog-eared. If yours doesn’t look like this, and isn’t in pristine condition, it’s time to get suspicious. 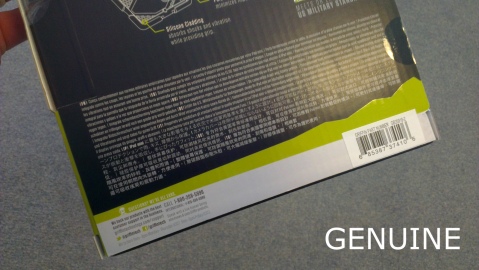 The real thing has a properly attached barcode with the actual UPN of the product. If you type this into Google, you’ll get results for the real product.

This is the only barcode sticker on the box, it isn’t even stuck on straight, and the product code X0005K99TL links to absolutely nothing on Google at the time of writing (except probably this blog, by the time you read it). As noted in the comments below, this may be an internal barcode used by Amazon’s warehouse (if you bought from a seller that uses the ‘Fulfilled by Amazon’ system), but the lack of any real barcode underneath it, or elsewhere on the box, means this box is fake.

It’s also worth noting that the fake had seal stickers with the Griffin logo on, whereas the real one didn’t. However, the fake ones weren’t even sticky enough to stay on properly – I hadn’t yet opened the box in the above photo and they were already peeling off.

This was a bit more of a giveaway. The real camera cover is properly fitted and recessed into the case. Now let’s see the fake:

On the fake, the rubber post that holds the camera cover in place hasn’t been trimmed down. It actually squashes flat when you put the iPad in, so you could be forgiven for thinking this might still be real – but Griffin cases are a premium product. They don’t make mistakes like this.

This was the enormous, obvious flaw with the fake. The real top cover, with it’s integrated screen protector, is clear and pristine, like this: 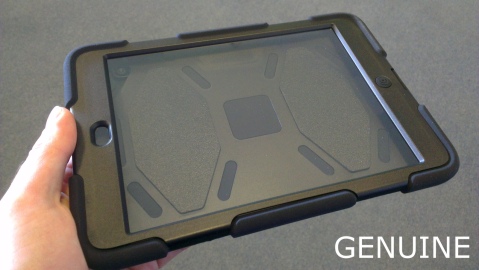 The fake one, on the other hand, has visible bubbles and an ‘oil slick’ effect due to having a peel-off film inside. The real thing does not have a peel-off film. 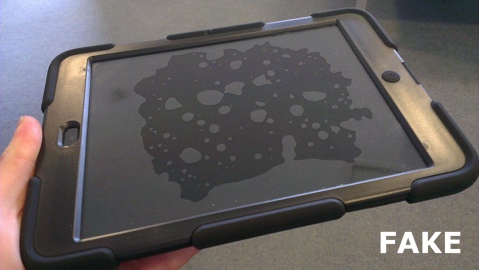 If you remove the peel-off film (which temporarily removes the bubbles) the screen protector will adhere (badly) to the iPad screen when it is fitted and cause bubbling and the oil-slick directly on the screen. Again, the Griffin screen protector does not adhere to the screen at all. Luckily, the fake peeled off relatively easily.

Have you been stung?

Get a refund. It doesn’t matter if you’ve opened the product: any reputable seller will have no problem refunding an item that is counterfeit. It’s worth remembering that small and even medium-sized sellers may well have been scammed themselves by their upstream supplier, so there’s no reason not to be calm and polite about it unless they refuse to be reasonable.

If the seller won’t play ball, contact your credit card company and discuss it with them. They will normally investigate the issue and issue a refund once they are satisfied with your claim, then they will charge back the seller in turn. This reflects badly on the seller, which is why any decent business will sooner issue a refund themselves.

Remember: the telltale signs can change!

The post was written in May of 2014. Since then, the design of genuine Griffin cases, and their packaging, will have changed. A new, genuine, box today won’t look exactly like mine. The actual case may have different markings too. Bear this in mind when making up your mind as to what’s real and what’s fake, and check your product against photos on the official Griffin website.

69 responses to “Spot the difference: is your Griffin Survivor case a counterfeit?”